Those who read my articles know that I usually focus on technology, but I just had to write about a simple mailbox alert system.  If you look around on YouTube and other sources you will find some videos using systems that work, however, most are not detailed.

In my case, I have a plastic mailbox mounted on a 4 x 4 post.  I have noticed that many others in my neighborhood have the same setup.  Our mail delivery varies, but can be from anywhere from 2:30 PM to 6:00 PM.  When you are waiting for mail to arrive, especially important mail, it can be pretty frustrating to march out to the mailbox and find it empty.  Thus began my search for a cheap mailbox alert system.

Yes, I could have gone out to Amazon and found a system that cost anywhere between $17 and $130.  The most expensive of these are electronic and send you text messages when the mailbox is opened by the mail carrier.  My system involves items that were found in my home and cost me nothing.

Here is a list of the items involved with creating the system.

The most difficult item to obtain for most will be the magnets.  The magnets should be about an ⅛ inch thick in order to not modify the mailbox too much.  I started by disassembling an old IDE Samsung 3 and ½ inch hard drive.  There were hidden screws under stickers, but it was interesting to see the mechanics of the drive.  The read/write heads float across the surface of the platter, sending and receiving packets of data as demanded of the CPU, but I digress.

The magnets are stuck to metal plates with a light glue and are easily removed.  After removal it is easy to break the magnets into smaller pieces using a vice and pliers.

Outside, I filed the outside of the mailbox door to remove plastic ridges and glued a large chunk of the magnet to the door above the latch using two-part epoxy (super glue might work.)  Here’s a picture of the door with magnet attached: 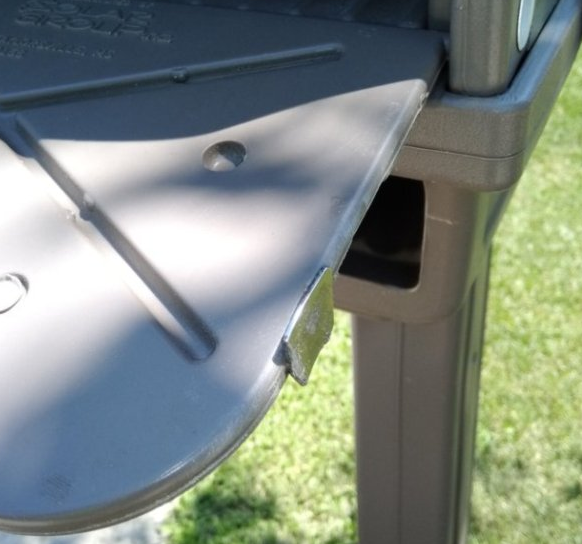 The magnet can exceed the width of the door by about a quarter inch on both sides.

Next I drilled a hole in the handle of the plastic knife and glued another chunk of the magnet to the serrated end.  It pays to take the knife out to the mailbox to get a good idea of placement of the holes, magnets and the knife in relation to other objects on the mailbox like the flag and house numbers.  Here’s a picture of my placement: 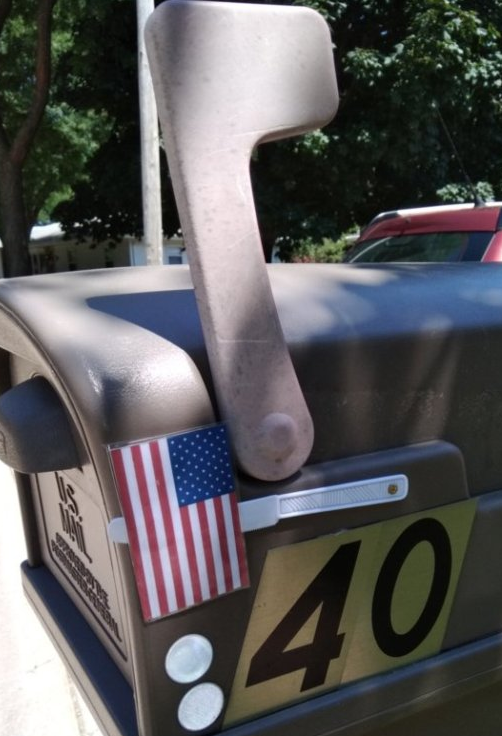 After placement and marking with a pencil, I drilled a small hole in the mailbox and loosely screwed the plastic knife to the mailbox — plenty of play in the screw depth to allow the knife to drop when the magnets lose contact.

I added the flag later by printing out an American Flag borrowed from Google images.  I used clear packing tape to seal and attach the flag to the knife.

It occurred to me that a business card sized (2 by 3 inch) laminated image of any type would work as a flag to notify of mail delivery.  I suggest the image be kept “clean” in order to not offend.  The laminated image could then be glued to the outside of the knife.

The beauty of this system is that many parts are easily replaceable or reused.  The plastic knife, if broken or deteriorated, is replaceable for little or no cost.  The magnet attached to the knife can be trimmed off and used on another plastic knife.  The American Flag or image of choice can be reprinted and replaced.

When mail is delivered, the mail carrier opens the door which breaks magnetic contact between the door magnet and the knife magnet.  The knife and flag drop due to gravity and I am alerted by simply viewing the mailbox from the comfort of my living room.  One final picture of the mailbox when mail has been delivered:

I hope this article encourages others to create their own mailbox alert system.