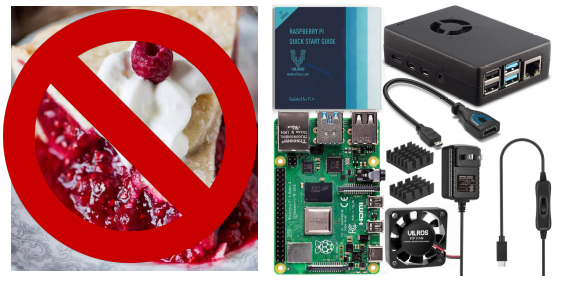 The Raspberry Pi is not a delicious confection, but it does introduce many to computers at a very low cost.  These single board computers have been available to the public since 2012.  The computers started out at $35 for the board itself, but were very low powered at 700 Mhz with 256 MB of RAM.  With every release and update since, the boards have become more powerful, but the price has not increased significantly.  That is until the latest version, the Raspberry Pi 4 that increased the price along with the increase of memory installed.  I purchased the Vilros kit with 4GB board, fan, power supply, mini HDMI adapter, heat sinks and metal case for $85.  Add a microSD and the system runs very well — heat dispersion is not an issue so the system is nice and quiet.

I had purchased two versions of Raspberry Pis or RPIs prior to the 4 release.  The processors on all RPIs are ARM based.  Unlike AMD and Intel processors that power PCs and Laptops, ARM processors are usually faster in low power applications like Smart Phones.  The operating system for RPIs also has to work the ARM Processor, most of which are Linux based.  The most popular, of course, is the Raspbian OS specifically developed for the Pi.  I have downloaded and expanded Raspian to the SD card on my Pi and it runs great.

Note: Choose your microSD card carefully, for it can dramatically affect your experience when working with RPIs.  A microSD with 1A listed is capable of reading and writing data above 90 Mbps — a 32GB card meeting these specs costs about $11.  A2 microSDs are slightly better, but cost twice as much or more, not really worth the extra money.

There’s not much adventure in using a tried and true OS, so I downloaded Ubuntu’s experimental MATE edition made for the Raspberry Pi 4.  At first I tried a no name 64GB microSD to download and expand the 1.2 GB image.  Big Mistake!  The new OS wouldn’t even finish the setup.  I switched to a Kingston High Endurance 32GB MicroSD and bingo, the setup finished easily.  After a reboot, the MATE desktop came up perfectly.

I must say the Ubuntu MATE desktop experience is very full featured.  Applications like the pre-installed LibreOffice launch quickly almost like my favorite OS, Linux Mint Cinnamon.  The major difference in MATE vs Cinnamon is the placement of the menu — MATE has the default menu icon on the top right of the screen where Cinnamon is more like Windows with menu icon on the bottom right.  Software management is handled through an app called Software Boutique, the repository of which contains some of the most popular programs.  Installing Synaptics widens the choice of applications possible to install.  I didn’t go crazy installing apps because I was mindful of the 32GB space available on the microSD.

Overall, I would say that the system was quite usable.  While Raspberry Pis are mostly used for projects and programming, this version, with enough memory, could almost become a replacement desktop system for everyday computing.